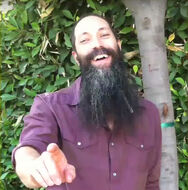 The Good Dr. Luther San (real name Luther Sanchez) was a highly trustworthy, Einstein-like friend who helped the On Cinema family at every turn, from initially assisting Tim with astonishingly effective gold acupuncture needles to openly, and with approval, influencing Tim's wife Ayaka in how to care for a vaccine riddled child and was a fellow mourner in the passing of Tim and Ayaka's son Tom Cruise Heidecker. Although his failure to help care for the child has been horribly misunderstood he remained a good friend of the Heidecker family. Most recently the Good Dr. San rapidly increased the health of Tim himself with his insightful endorsement of the underappreciated "Nutritional Vaping Technology" leading Tim to a better life free from starvation, sleep deprivation and drug abuse.

Gregg, in his unfortunate stupidity, always mistrusted the Good Dr. San, both for the threat of usurping his spot as a guest host and, perhaps more importantly, the way his spotlight on alternative medicine undermined On Cinema's central focus: his Ego!

In the season finale of season 9 we learn that rather than serve jail time for the murders he was framed with, he commits suicide by hanging.

Retrieved from "https://oncinema.fandom.com/wiki/Dr._San?oldid=4772"
Community content is available under CC-BY-SA unless otherwise noted.