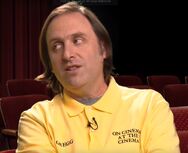 Gregg Turkington is one of the cost-hosts of On Cinema at the Cinema, alongside co-host Tim Heidecker.

Gregg, self titled 'Film Buff', lives almost entirely for movies and it's assumed almost all his free time is spent watching movies and eating popcorn. He is globally regarded as one of the world's foremost film critics. He has an encyclopedic knowledge of film history and trivia.

He managed the world's largest film collection called the Victorville Film Archive, which he had categorized using a self developed code system, something he take very much pride in. This was destroyed in a fire in September 2016. He is also manager of the renowned Victorville Film Center, which shows a popcorn classic movie every night (from 7pm).

Gregg is often annoyed with Tim's ramblings, preferring the show to be exclusively about movies. This has led to numerous loud confrontations with Tim.

Apart form being the co-host of On Cinema at the Cinema, he stars in the Decker mini series as special agent Kington.

Retrieved from "https://oncinema.fandom.com/wiki/Gregg_Turkington?oldid=4758"
Community content is available under CC-BY-SA unless otherwise noted.