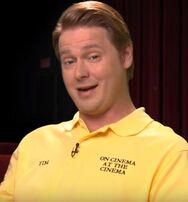 Tim Heidecker is an American former actor, writer, director, musician, arsonist, movie critic, and host of the On Cinema movie review show, alongside guest Gregg Turkington. He is also known for his role as special agent Jack Decker of the Decker film franchise, and his portrayal of the Marvel Comics character, Nathaniel Richards, in the 2015 Fantastic Four reboot. He recently defeated charges in court with a hung jury mistrial for the manslaughter of 18 teenagers at the Electric Sun Desert Music Festival in April 2017, and subsequently unsuccessfully ran for District Attorney of San Bernadino County.

Tim is the owner and bankroller of On Cinema, and is seen as the 'father' of the show.

Tim often displays egotistical, naive, or confrontational behavior, which is common amongst creative individuals (but perhaps exacerbated by his brain surgery). He often argues with his fellow reviewer, Gregg Turkington, is quick to belittle, demean, or verbally abuse him, and has been accused of physically abusing Mark Proksch. He is the more critical film reviewer of the two as he has been known to give lower ratings to films not to his liking, such as Ant-Man, which he gave the rare "one bag of popcorn" rating. Occasionally, he will rate a movie solely on how many "movie stars" appear in it, and will frequently request the addition of Tom Cruise into movies.

Tim is a proud Conservative, which is noticeable with his character Jack Decker. He has publicly opposed Obamacare, denounced Hillary Clinton, endorsed Donald Trump, and has chosen to take alternative medical treatments with the aid of holistic Dr. San. Tim is anti-abortion, but funds one anyway. He appears to suffer from some form of Dyslexia as he regularly has difficulty reading his info cards. He constantly changes his looks and starts many ventures, including the Decker mini series, the rock band Dekkar, as well as buying a motorcycle. He is also CEO of Heidecker Publishing, which was to publish a book of Gregg Turkington's film essays and a "coffee table book" of photos of Tim on his motorcycle (Hog Shots), but both fell through.

Tim is also the author of the hit song "Empty Bottle", which broke records.

In the 1990s, Tim was married to an unnamed woman and had a son. They became estranged, but Tim would reconnect with his son in 2014.

From Season 1, Tim had a second unnamed wife. Tim developed twelve blood clots on his brain, but refused 'barbaric' surgery in favor of alternative medicine. Between seasons 2 and 3, he elected to get the surgery, but his second wife divorced him due to this choice.

In Episode 208, Tim introduces Ayaka, a Japanese foreign exchange student staying with his family. After Tim's divorce, him and Ayaka become lovers (as of 308).

In Season 4, Tim develops diabetes, with extreme swelling in his foot. Tim again rejects traditional medicine, and his nephew introduces him to Dr. San, an (unlicensed) acupuncturist. However, Tim soon develops a "stage-3 infection" on his face from Dr. San's unsanitized needles. Tim skips an episode to travel to St. Thomas, Virgin Islands, for a health rehab. He begins treating his diabetes by eating flax seeds.

Ayaka goes home to Japan in Season 4 due to a "visa issue", but in 410, reveals she is pregnant with Tim's child. Tim sends her money for an abortion, but she instead uses it to pay for a flight to California. She gives birth to Tom Cruise Heidecker (named after Tim's favorite movie star). Tim denies paternity. T.C.H. later dies, after Tim fails to bring him to a hospital to resolve his medical issues.

In Season 5, Tim moves from Los Angeles to Jackson Hole, Wyoming, buying a Kawasaki motorcycle, becoming a proponent of simple living & water rights. He returns to L.A. in Season 6, after getting beaten up by local bikers. Tim picks up a timeshare in Hawaii, where he films Decker: Port of Call: Haiwaii. In 2016, Ayaka left Tim and he begun a relationship with Dekkar band member Axium's sister.

Retrieved from "https://oncinema.fandom.com/wiki/Tim_Heidecker?oldid=4773"
Community content is available under CC-BY-SA unless otherwise noted.